At our recent Kiwanis Installation Banquet, Michael K. Smith was named our 2014-15 Kiwanian of the Year!  Unfortunately, Michael was unable to attend the banquet, so President Bill Friedman, our 2013-14 recipient, presented Michael with the Henry Heymann Memorial Award at today's meeting.

Michael has served as Club President for the 2012-13 year, and as CEO of the Kiwanis of Lafayette Foundation for the 2013-14 year where he provided oversight for the $1 million BCBS Healthy Living Club Grant.

Michael's most recent roles include "all around tech guru" and "go to speaker" in the event of a last minute cancellation.

Congratulations, Michael!  We appreciate all that you do! #KiwanianoftheYear 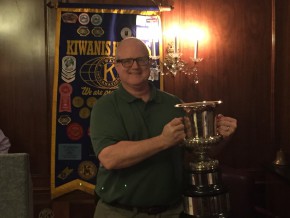