Kiwanis of Lafayette thanks Lafayette Consolidated Government Mayor-President Joel Robideaux for speaking to us today.

Mayor-President Robideaux was elected in October 2015, and officially took office on January 4, 2016.

Robideaux spoke to us about the challenges facing the city and parish during the first three months of his term.  He also spoke about his priorities, including improving the aesthetics of our gateways to the city from Interstate 10.  Robideaux informed us that first among these priorities is improving the University Avenue gateway from the Interstate to Four Corners.  Mayor-President Robideaux also spoke about his efforts to convert the animal shelter to a “no-kill” animal shelter.

Thanks again to Mayor-President Robideaux for meeting us today. 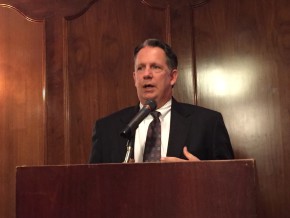