Kiwanis of Lafayette thanks UL Women’s Head Basketball Coach, Garry Broadhead, for speaking to us today.  Garry is a 1980 graduate from UL (then USL) and has been coaching women’s college basketball at UL since the 2012-13 season.

Garry spoke to us about his philosophy of coaching and how the team chose one word as a focus for each season. The first two seasons that word was “win”.  In 2014-15, it was “purpose” and that season saw UL women’s basketball claim the WBI tournament championship.  For the 2015-15 season which just concluded, the word was “faith.”  With faith, the UL Women’s team attained a program high with 25 wins and a second WBI tournament championship.

Garry brought with him a basketball hoop to demonstrate his philosophy.  The regulation basketball hoop is 18 inches in diameter and that diameter does not change regardless of whether the player is playing youth basketball, high school, college, or professional ball.  His point was that  when players fail, it is impossible to widen the goal to make things easier.

Thanks again to Garry Broadhead for giving us such a thought-provoking and inspirational speech! 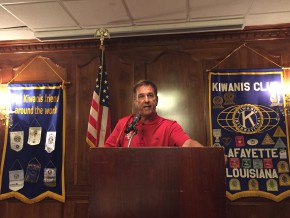