On November 21st 2015, Mark Garber was selected by the people of Lafayette Parish to serve as the 27th Sheriff of 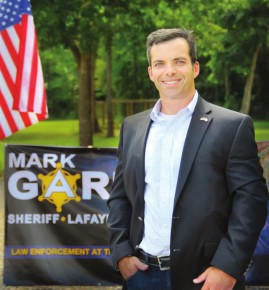 On November 21st 2015, Mark Garber was selected by the people of Lafayette Parish to serve as the 27th Sheriff of Lafayette Parish.  Sheriff Garber began his career in law enforcement serving as a commissioned deputy in Acadia Parish under then Sheriff Ken Goss.  He then went on to serve as an enforcement agent with the Louisiana Department of Wildlife and Fisheries and as a Police Officer with the City of Arlington Texas.  While in Arlington, Sheriff Garber served in the patrol division, traffic enforcement (as a motor cycle officer), Field Training Officer, Police Sniper and Special Operations (Arlington’s version of SWAT team leader).

Sheriff Garber transitioned from local law enforcement to federal service when he was selected to join the Unites States Air Force Office of Special Investigations (OSI) as a civilian Special Agent, Criminal Investigator.  As a Special Agent, Sheriff Garber was selected for deployment as a battlefield interrogator as part of a Special Operations Task Force in Iraq. Once in Iraq, Sheriff Garber assisted various Special Operations Forces by conducting battlefield interrogations and assisting with the exploration of intelligence information.  Sheriff Garber is one of only a few civilian Federal Agents to have been awarded the Bronze Start Medal for activities in a combat theatre of operations.

Following redeployment to the United States, Sheriff Garber continued his federal law enforcement service as a United States Secret Service Special Agent in the New York City field office.  Upon his return to Lafayette, Sheriff Garber opened his private law practice and worked as a felony prosecutor with the 15th Judicial District Court where he served Lafayette Parish for more than 6 years becoming intimately familiar with the local criminal justice system.

With a degree from Louisiana State University and a Juris Doctorate from Southern Methodist University, Sheriff Garber has a unique combination of education and experience that was gained by years of being involved in the criminal justice process from the initial investigation, arrest, prosecution, conviction and sentencing.