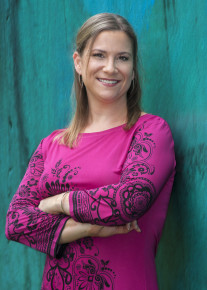 A Lafayette, Louisiana native, Rebecca Doucet has almost 20 years experience with non-profit organizations in academia, healthcare, and performing arts, advancing their missions through strategic marketing and development initiatives. Most notably, she was appointed to the Development Officer position for the AB Freeman School of Business at Tulane during its $100M Post-Katrina Rebuilding Fund campaign and its $650M “Promise of Distinction” capital campaign. In her brief tenure at Tulane, she raised $1.5M to create endowed funds in support of scholarships, professorships, research and capital projects. Doucet also served as the Development Director for the Performing Arts Society of Acadiana.

Doucet, married to Matthew Doucet (sheriff deputy, fiddle player/violin maker and son of Michael Doucet, founder of BeauSoleil) has a longstanding love and appreciation of music with more than a decade worth of experience directly involved in running performing arts organizations.

Doucet joined Acadiana Symphony Orchestra & Conservatory of Music’s administrative team as the director of marketing in 2013 and was promoted to deputy director almost a year and a half later. During her tenure with the ASO&C, she has launched two successful new initiatives, the Partners for Education Campaign in support of Do-Re-ME! and Overture magazine, while overseeing the organization’s fundraising and marketing plans.

A graduate of Leadership Lafayette, Class XXVII, Doucet now serves on the Leadership Institute of Acadiana’s Programming Committee and was a 2014 recipient of the “20 Under 40” Leadership Awards. Doucet is also a member of 705 and runs a virtual franchise with Rodan + Fields. Occasionally, you will find her coaching soccer, working on school projects, and attending music classes with her two sons, Andre’ (8) and Jacques (5).