Captain Dean A. Wilson is the Executive Director and Basinkeeper for Atchafalaya Basinkeeper, a waterkeeper group in south Louisiana working to protect 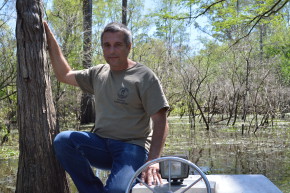 Currently, Basinkeeper is flying over the Basin regularly to monitor illegal activities, working on a hydrology plan that will guarantee the survival of the Atchafalaya’s swamps for future generations, challenging permit applications for new canals in the Basin, working to change useless timber easements so that they actually protect Louisiana’s  cypress swamps, lobbying EPA and public officials to do their job protecting wetlands, working on an educational campaign and suing polluters and illegal developers of wetlands. In 2005 he became a leader in the fight against the cypress mulch industry, a movement that ended most cypress logging operations in coastal Louisiana in 2008.

“Both the Atchafalaya Basin and the Cajun way of life are rapidly disappearing.  In an effort to save the Basin and this culture, I want to share my knowledge and love of this land with other people. I’m completely committed to the preservation of the Basin for future generations,” –Dean Wilson.