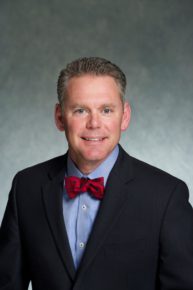 David, L. Callecod is President of Lafayette General Health, a seven hospital system with an additional six clinical affiliate hospitals in Southwest Louisiana.  He is a Fellow of the American College of Healthcare Executives.  Callecod was inducted into StuderGroup’s Hall of Fame in October 2011 and is a national speaker on healthcare management and culture change.

Since 2000, Lafayette General Medical Center (LGMC) has been named the Consumer Choice Award winner for the region by National Research Corporation.  St. Martin Hospital was named among the Top 100 Best Places to Work in Healthcare by Modern Healthcare Magazine in 2014 & 2015.

He and his wife Kim have three children, Ellen, Ian, and Nolan.