Dean spoke to us regarding Basinkeeper’s mission, which includes regular flights to monitor illegal logging activities in coastal wetlands including the Atchafalaya.  According to Dean, cypress trees take centuries to mature and once logged it is nearly impossible to restore.  As a result, thousands of acres of cypress have been replaced by invasive species of trees that are not commercially viable.

Dean also discussed how Atchafalaya Basinkeeper led the fight against the cypress mulch industry and ended most illegal cypress logging operations in coastal Louisiana in 2008.

Thanks again to Dean Wilson for an informative and thought provoking discussion. 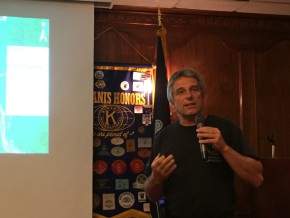