Kiwanis of Lafayette thanks Scott Feehan, Executive Director of Festival International de Louisiane, for speaking to us today.

Mr. Feehan, who has been Executive Director since 2016, first spoke to us about the history of the Festival, having been founded in 1986 as a means of fostering civic pride, redevelopment in the downtown area, and promoting international business following a prolonged down turn in the local economy. He noted that the inspiration for the festival was drawn from the annual Summer Festival in Quebec City.

Over the years, Festival has grown into the nation’s largest international music festival with more than 300,000 guests from more 48 states and several countries. Currently, the economic downturn has forced the Festival to return to its roots and make plans for raising funds to keep it self-sustaining. He also spoke of the many of the challenges the Festival faces in scheduling the peformers.

Finally, he showed a brief video announcing the schedule of performers. This year, in addition to the many acts from francophone countries as well as the local acts, the Festival will host a drum troupe from China and musicians from India.

For more information about Festival International and its lineup of peformers, please visit their website here.

Thanks again to Scott Feehan for speaking to us today! 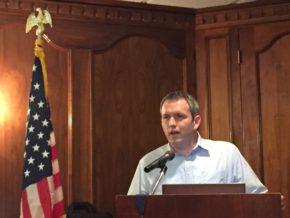