At the September 30 Kiwanis Installation Banquet, Lafayette Kiwanis honored two members whose service has made a difference.

The 2014-15 Kiwanian of the Year was unable to attend the banquet and the club will recognize him at the next meeting.

Gerald served this year as Immediate Past President and CEO of the Kiwanis of Lafayette Foundation.  Gerald's term as CEO comes at the end of a three year, one million dollar grant from the Blue Cross Blue Shield Foundation; however, Gerald was among one of a handful of members who oversaw the grant from its inception.

As a result of the grant, six local parks received new playground equipment.

Thanks and congratulations to Gerald Guilbeaux, the 2014-15 Louis Michot Award Winner! 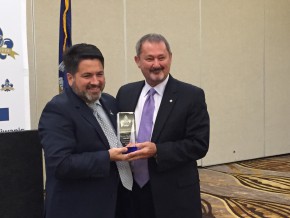