He's been described as the "Cajun John Wayne", a "beacon of justice", and "the most irresistibly intimidating man in America".  He's been 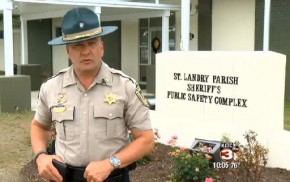 He’s been described as the “Cajun John Wayne”, a “beacon of justice”, and “the most irresistibly intimidating man in America”.  He’s been called out by the Tonight Show  host Jimmy Fallon to run for President.

Capt. Clay Higgins comes across very different than the public safety spokespeople we generally see on TV. While not as polished as some, people sure do love what he has to say. He started appearing in the Crime Stoppers weekly segments at the beginning of the year and has quickly garnered a cult following.

He’s not paying too much attention to the publicity; he is just thankful knowing the Crime Stoppers segments seem to be working.

On a recent segment, Higgins looked into the camera and told Ladarious Young to turn himself in to “start to make things right.” “You can’t run from your own guilt, son,” Higgins said into the camera while discussing Young, a local fugitive who was accused of assaulting a woman with a beer bottle. Young was also linked to a casino heist. “You can’t hide from what you’ve done, and you’ll never escape … the long arm of the law,” The next day, authorities said, Young walked into the sheriff’s office and surrendered, telling officers the broadcast had persuaded him to do the right thing.

“We’re getting more tips than we ever did” since he began appearing in the videos last November, Higgins said. “Everyone is investigated and they frequently lead to arrests. Seven or eight people have turned them in.”

Feedback  on his Crime Stopper segments via social media outlets include comments like these:

“I got chills just listening to that man talk,” a fan wrote recently on Facebook.

“You scare me. In a good way. Makes me feel safe,” wrote another.