Kiwanis of Lafayette thanks Daniel Edgar, and his son Joey, for speaking to us today.

Daniel Edgar was born in Lidia, Louisiana and has lived and worked in the swamps his entire life. He and his son Joey are now part of the cast on the hit History Channel reality show, "Swamp People" joining the cast two years ago. The show just began its eighth season.

"Swamp People" highlights the culture and history of alligator hunters. Daniel told us about how he initially turned down the offer to participate in a documentary on alligator hunting which led to the creation of the show. He resisted further efforts to join the cast for several years until asked personally by Troy Landry to join the show.

Mr. Edgar spoke more about his life's work and his efforts to change the laws in ways that both preserve the wildlife, but also the ability of workers in the industry to earn a living. He is also a strong supporter of water rights.

Thank you to Daniel and Joey Edgar for your interesting discussion!

Also, at our last meeting, we met with Third Circuit Court of Appeal Candidate, Candyce Perret. This week, we met one of her opponents, Susan Theall. Informing the voting public is in line with the Fourth Object of Kiwanis, "To develop, by precept and example, a more intelligent, aggressive, and serviceable citizenship."

See you next week when we welcome Mr. Wayne Corne, architect for the new St. Pius Church under construction. 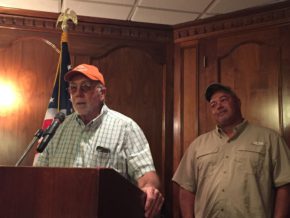