Kiwanis of Lafayette thanks Coach Mark Hudspeth, Head Football Coach for the Louisiana Ragin’ Cajuns for speaking to us today!

Coach Hud was hired as the 26th head coach in program history on December 13, 2010.  Since that time he presided over the best four year record in school history, amassing 9 wins each of his first four seasons and claiming a New Orleans Bowl Championship each time.

Coach Hud entertained the club with his discussion of the preparations this year's Ragin' Cajun football team have been making for the upcoming season.  To that end, he gave the members a rundown on the typical summer schedule for the players.

He was most proud to mention that the football team's GPA is the highest in the State of Louisiana and in the SunBelt Conference.  He invited our members to tour the new Athletic Excellence Facility.

Finally, Coach Hud also talked about the 2016 schedule.  For the first time in school history, it will be starting the season with three consecutive home games with Boise State, McNeese, and South Alabama all making the trip to the Swamp!

Thanks again to Coach Mark Hudspeth for visiting with us today! 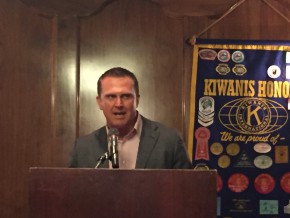