It's not often that a speaker comes to visit us at Kiwanis of Lafayette that so moves the membership that the speaker receives a standing ovation.  To receive a second standing ovation from our crowd is simply unprecedented.

That's exactly what happened today when Captain Clay Higgins of the St. Landry Parish Sheriff's Office spoke to the Lafayette Kiwanis Club.  Captain Higgins inspired everyone with his message of redemption.  He talked about his life in law enforcement and working the overnight shift.  These experiences forged Captain Higgins's belief in redemption.

He explained how his earliest Crime Stoppers broadcasts were plain, merely stating the facts of the crimes they were investigating.  It was only after Captain Higgins very literally threw away the script that he felt his message of redemption could be heard.  As a result, Captain Higgins' Crime Stoppers segments are now the most watched of their kind.  But Captain Higgins is most proud to report that as a result of his broadcasts, 15 felons have voluntarily surrendered.

Captain Higgins concluded by challenging all of us to "throw away the script" in our own lives.  Captain Higgins also shared with us his plans for a homeless shelter in Opelousas which he intends to fund through a non-profit corporation that sells merchandise through his website captainhigginsgear.com.

Kiwanis of Lafayette thanks Captain Clay Higgins for sharing his powerful message with us! 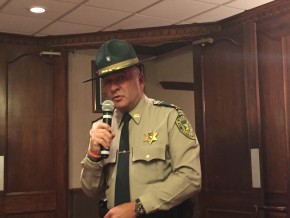